By Paul Madden of The Dissident Drum

In his book Coogan describes the impact that British government policy had on the period of The Great Hunger in Ireland.

Successive legislation and measures taken to address the potato famine tragedy only exacerbated the problem exponentially, resulting in what the author refers to as a “biblical” period in Irish history.

In his introduction Coogan writes:

As this is written, Ireland, through the corruption, incompetence and profligacy of the then governing Fianna Fail party, has lost its economic sovereignty.  …a highly disturbing similarity between the famine era and the present can be seen in the existence of the National Asset Management Agency (NAMA) in Dublin, which takes the assets of recession victims and, after what is euphemistically termed a “haircut”, sells these on to well-pursed new owners at greatly reduced prices.

This was the same procedure dictated by the Encumbered Estates Act during the Famine, whereby land obtained from distressed owners was sold on to wealthy purchasers with the intention of creating larger holdings and a more stable rural economy.  The famine bell does not merely toll for those who died during the nineteenth century; it has resonance for those who live in the twenty-first.”

Coogan’s analysis is born out by the events which are catalogued in his work.

What Coogan reveals is that the British government’s actions reflected some important features which are mirrored in the actions of this Fine Gael / Labour government miserably attempting to deal with the current financial crisis which threatens to become Ireland’s second holocaust:  the destruction of Irish society and the suffering of generations of innocent Irish men, women and children.

The British government viewed the famine disaster as PROVIDENCE.  It was God’s punishment of the Irish for their perceived ignorance, their barbarism, and their inherent laziness.  The people were viewed as backward peasants who spent their time having sex!  The population was in excess of 8 million and the famine was God’s solution to overpopulation and under productivity.

To the British aristocracy the famine was, literally, a God-send.  It removed millions of people from the land, allowing landlords to consolidate land into larger, more productive holdings capable of profitable, new industrial farming practice.

When the government came to impose measures to address the suffering of the people, their focus was on capitalising on the opportunity to achieve those goals.  Welfare efforts such as the work houses and the soup kitchens were made as restrictive as possible to ensure that as many people as possible were excluded from the schemes.  The philosophy was that if people could not access government welfare they would be forced to depend on themselves: seek work in order to improve their situation or emigrate to find a life elsewhere.

One of the saddest aspects of the famine tragedy was the British government’s religious adherence to the tenets of economics, Adam Smith who promoted the theory of the Free Market.  Food, what there was, was available to the people but at market prices.  Corn, which was largely inedible, was bought by Prime Minister Robert Peel to supplement food supplies but its supply was controlled so as not to disrupt the market price. 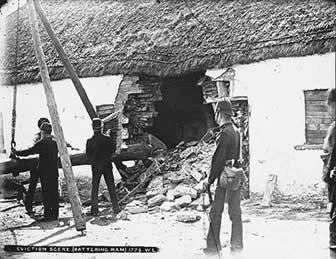 The British aristocracy, many of them large landowners in Ireland, viewed the Irish people as a class even lower than the lower classes in England.  People were not entitled to expect anything other than the life they had been born into.  If starvation or immigration was their fate then so be it.The government also maintained the absolute autonomy of landlords to conduct their affairs with impunity, denying the rights of the people – rights which in England were upheld.  Landlords evicted families into the cold Irish winter year after year under the flimsiest premise, condemning them to almost certain death.  To force families out of the their homes the houses had their roofs torn down and walls destroyed to prevent the destitute from even seeking some degree of shelter from the elements.

Welfare support was designed to help only those who qualified … and qualification was made as difficult as possible.  And those that qualified would only be given food within the walls of the work houses.  It was illegal to provide food or assistance to those outside the work house.

Conditions inside the work house were designed to make it so uninhabitable that people would prefer to take their chances outside in the bleak, harsh countryside rather than enter the work houses.  The shelters were so overcrowded and badly maintained that disease spread quickly, making the work houses no more safe than the countryside where thousands were dying by the roadsides daily.

In 2015 the Fine Gael / Labour government under Enda Kenny are “managing” the current economic crisis with the same approach as the Peel and Lord John Russel’s British government in famine Ireland.

In 2012 Enda Kenny addressed the political and financial elite of Europe at Davos in Switzerland and without any sense of irony and without batting an eyelid laid the blame for Ireland’s woes squarely on the shoulders of the Irish people.  At least when Charlie Haughey spoke to the nation in 1980 he included himself in the comment “WE are living way beyond our means”.  As we know, he was himself guilty of this but at least he had the sense to represent himself as one of the people.  In Davos, Kenny set himself apart from the people.  Sitting comfortably amongst his multi-millionaire political pals he stretched his arm out and pointed back at Ireland, “the (Irish) people went mad borrowing”.

Kenny was saying what the British government of Russell and Charles Trevelyan believed: the people got what they deserved … they were reaping what they had sowed.  Although Trevelyan was not a member of the British cabinet, he was Assistant Secretary to the Treasury and by Coogan’s account, was by far the driving force in British policy maing at the time of the famine, even acting with absolute autonomy by publishing commentary in the British press.  He was immortalised in Pete St. John’s anthem The Fields of Athenry.  Kenny has been immortalised for future generations in Stephen Murphy’s poem Dear Enda. 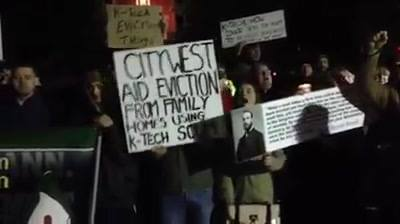 Like the British government, his Irish government placed the landlords, the property owners, as the most important people in the country.  In the Land and Conveyancing Reform Act 2013, Kenny let the landlords, the mortgage companies and property owners (who were the real villains in the story) off the leash, giving them impunity to evict and repossess homes from Irish families.  Thankfully for those in need of help and support, which is not forthcoming from the State, bodies like The Hub and the National Land League have been (re)established to protect the vulnerable.

The rights of the landlords were to absolutely outweigh the rights of the people.  Even families with as little as one month’s arrears in their mortgage payments (and I know this personally) could be harassed, bullied and evicted to protect the investments of billion euro investment firms. 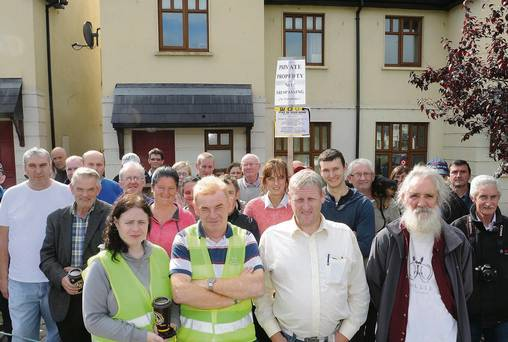 This government’s social welfare policy also repeats the immoral approach as the British government in the mid 19th century.  Welfare is made increasingly difficult to access.  The criteria for qualification of medical cards has been made drastically more stringent.  Children and elderly people, even with terminal or life threatening illnesses, many suffering great pain, are no longer entitled to the medical care that makes their lives bearable.

Welfare has been cut to extreme levels.  While it may be argued to have become too generous in the previous decades when times were good, it is now, when times are hardest, that it is needed the most.  It should not be reduced in bad times, but retained to be reviewed at a later time when circumstances for those most in need are improved.

Schemes such as JobBridge are the modern day equivalent of the famine work houses – a solution so unpalatable as to be the last desperate resort of an impoverished workforce.   It is touted as something positive but it is the enforced slavery of the disenfranchised.  The hardship caused by austerity and the pretense at social protection also fuels emigration.  An entire generation of our best and brightest, the very people that could drive the economy out of recession, are taking to the coffin ships again, leaving family, friends, homes and even jobs behind to search for a humane standard of living elsewhere.

And the (financial) markets that were the ground where the blight of this economic famine festered and flourished are held sacrosanct.  Banks that were insolvent, poisonous and a cancer on the economy were deemed “too big to fail”.  Their at best immoral behaviour and at worst criminal manipulation of finance and flagrant disregard for social responsibility and the regulations under which they were supposed to operate have been whitewashed by a political system complicit in the whole affair.

The same systems, structures, players and bodies that were culpable in the 2008 crash have been bailed out and are now poised to exploit the struggling populace for even more profit.

What is most despicable about Enda Kenny’s government is their adoption of an air of entitlement and impunity that can only be seen in the British House of Lords.  Kenny has parroted his precious mandate to act as Ireland’s dictator many times since taking office.  Except he is now treating his “democratic mandate” almost as a divine right to act as he and the other three horsemen (well two horsemen and Lady Godiva) of the unconstitutional EMC deem fit.  In his ill-fated, unilateral attempt to abolish the constitutional body of the Seanad he refused to engage in any public debate to defend, justify or even explain his position and now, with an unprecedented opportunity to put his government’s case to the people in the public debates of Vincent Browne’s Tonight forum, his cowardice has become Fine Gael party policy … when we are on the brink of a general election campaign!

Irish life was fundamentally decimated in the nineteenth century not by the failure of a several years of single vegetable crop but by the total disconnect of a government that did not understand the problems of the people and acted with a total absence of humanity in dealing with them.  Irish life in the 21st century is being decimated by exactly the same inhumanity.

So what is the District Court